Welcome to the City of Broken Arrow’s Recycling Site!

The Broken Arrow Municipal Authority (BAMA), which is comprised of the five City Councilors and oversees the City’s Sanitation service, unanimously approved adopting a curbside recycling program for Broken Arrow refuse customers at its Nov. 5, 2019, meeting. 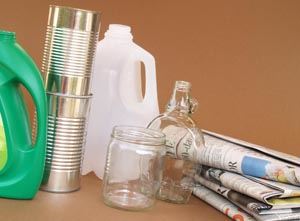 On December 5th, 2017, the Broken Arrow City Council approved the Citizens Recycling Committee's recommendation of running two concurrent curbside recycling pilot programs encompassing 500 customers each. The first pilot would continue the collection of garbage in trash bags, but include a plastic cart for recyclables. The second pilot would include a cart for both trash and recycling services.

Both pilot programs would reduce pick up to once per week instead of twice. The estimated cost for running the two pilots projects is $300,000, funded by the Broken Arrow Municipal Authority (BAMA).

Current sanitation routes will determine who will be selected for the pilot, which is anticipated to begin sometime in early 2019. Please note that this is just a pilot to determine if curbside recycling is feasible in Broken Arrow, and if it is, recycling would be completely voluntary.

About the Citizens Recycling Committee

The Committee, comprised of 12 members of the public and two Councilors (one as an alternate), was formed in fall 2016 after a citizens survey in Spring 2016 showed a favorable attitude to implementing a curbside recycling program in the City. Committee members were tasked with understanding the opinions of Broken Arrow refuse customers and to serve as a guide for the development of future refuse and recycling services.

Meeting 14 times between November 2016 and July 2017, the committee educated themselves on recycling finance and economics, possible pilot programs, collection systems and recycling as it relates to economic development and sustainability. Several meetings included tours of recycling facilities within the metropolitan area, such as the M.e.t.’s Broken Arrow site, the Covanta Energy plant in Tulsa and the Tulsa Recycling and Transfer Material Recovery Facility.

Free viewers are required for some of the attached documents.
They can be downloaded by clicking on the icons below.