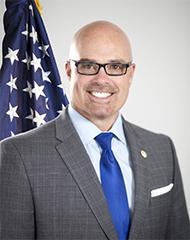 Michael Spurgeon started work as City Manager of Broken Arrow in September 2015. Including Broken Arrow, Spurgeon as worked in 5 different communities in Oklahoma, Missouri, and New Jersey and has over 31 years of municipal management experience.

Spurgeon holds a Master of Public Administration degree from Rutgers University and Bachelor’s degree in Business Administration from Edison State College. In 2018, he received his Certified Municipal Official designation from the Oklahoma Municipal League.

Michael is a past winner of Oklahoma’s prestigious Don Rider award for Oklahoma’s Outstanding City Official of the Year and in 2006 was recognized as the State’s Emergency Management Public Official of the Year. He was recently presented with the 2016 Broken Arrow Chamber of Commerce Chairman’s Award. He was named as an honoree to the “10 To Watch in Greater Tulsa” List by GTR Newspapers in 2018.

Prior to working in the field of municipal government, Spurgeon served in the U.S. Army. While working in public administration Spurgeon was also a citizen-soldier, serving in the Army National Guard Reserves as an Infantry Officer. Spurgeon attended Army Officer Candidate School (OCS) and was selected Distinguished Honor Graduate and earned the rank of U.S. Army Commissioned Officer.

Spurgeon is originally from Tulsa, where his father was a Captain and retired from the Tulsa Fire Department, and his mother worked for the Tulsa Police Department. He and his wife Jill got married in 2016 and live in south Broken Arrow with their Great Dane Luna.